In the first years of computers, different processor architectures began to be produced. These architectures are the rules that determine the code that can be run on and the results of the code that is run. I don’t want to dive too far into its history (I don’t know too much :)), the Assembly language that has survived to the present day and will be discussed in this blog post is the x86 Assembly language created for the Intel 8086 architecture. Assembly is one of the low-level languages. It’s more user-friendly than machine code, but still not like high-level languages. It is one of the languages closest to machine code. In this blog post, the structure and analysis of x86 Assembly language in general will be discussed.

Without digging deeper, let’s see, for example, what happens in the background when a C/C++ source code file is compiled. Here we come across three concepts.; Compiler, Linker and Loader.

Simply when a source code file is compiled, the structure that occurs is as follows:

So why do they concern us? I won’t be Polyanna at this point; A person who wants to analyze malware should know the Assembly language at least the level of 101. My view is this; Someone who doesn’t know assembly language can’t be a malware analyst. That’s why I need to talk about the basics of this language in my malware analysis blog series. 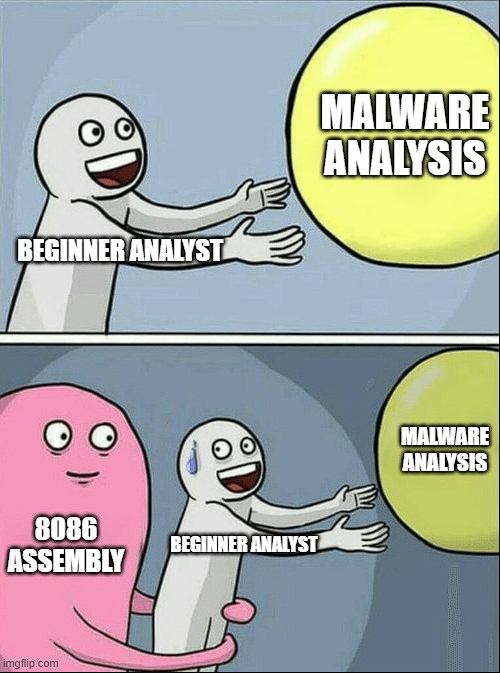 There are predefined register values in assembly language that are used for specific purposes. We cannot do “int a=5” as in traditional coding languages. So, what are these registers?

Perhaps these are the two most important registers for a malware analyst. You will see how much it is used in the following articles:)

The Multipurpose Registers mentioned above have numeric values, but the flags we will talk about in this section have logical values. They can only take the values “0” and “1”.

Unlike other registers, they are registers used to generate/store memory addresses. It has similar structures to the “Section” sections in the previous article.. See PE 101.

The structure of assembly language is generally “INSTRUCTION TARGET, SOURCE”, but for some commands this may vary. For example;

The instruction to be used to load the 0x0020 value into the AX register is as above. The type of numeric values used in assembly language must be specified. For example, “0x” (may not work in all emulators) for hexadecimal numbers, the “H” character after the number and the “B” character for binary data. There is no need to use a character for decimal numbers.

It takes specific parameters when running instructions and in Assembly language these parameters are called “Operand”. For example, in the command above, AX is a operand.

We need to talk about opcode here. Basically, what Disassemble tools do is define the OPCODE values and rules of the file structure and interpret the given executable file (I know it’s not that easy:D). The OPCODE table for the 8086 architecture is available online. As an example, let’s look at an image from inside the IDA tool: (You can see it by changing the value in the General-> Number of opcodes section in the Option->.)

By interpreting the hexadecimal values in the executable section of the file, we see that the operations performed shows us the equivalent in assembly language and that this is a sequential process.

In high-level software languages, function calls are usually called like “function_name(parameter1,parameter2)” and if there is a return value, they are assigned directly on that line etc. So how does it look when we compile it? Here we need to look at the stack structure. A stack is a data structure used for data management and storage. LIFO i.e. Last In First Out structure: 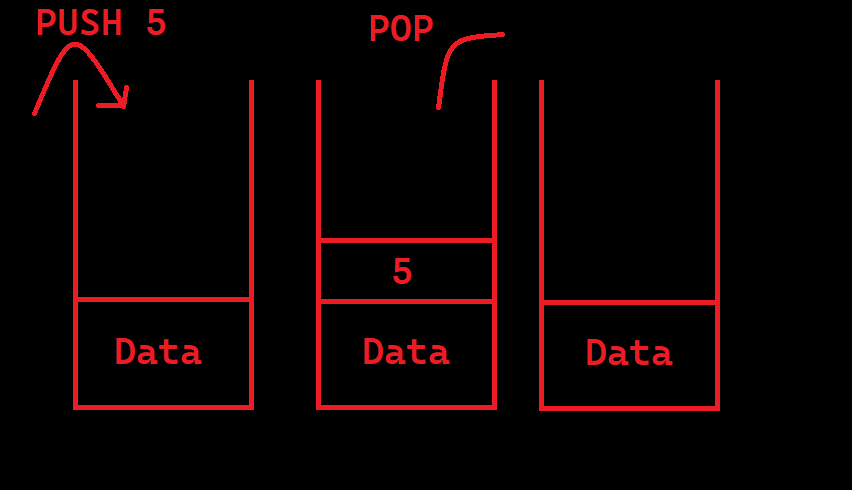 For example look at CreateFileA:

Parameters are defined as file name as 1st parameter, desired access level as 2nd parameter, etc. So how does this function look on Disassambler/Debugger when called in code?

As seen in the image; The push command was executed 7 times for 7 parameters and the parameters were pushed onto the stack in reverse order. Instructions can include different from Push that don’t modify the stack.

In general, we talked about the basics of Assembly that a malware analyst should know. Now let’s gather all the information here and practice.

Let’s compile the sample code above and examine it in the IDA tool. First of all, we look at the beginning of the program. Our initial values are assigned with 3 MOV instruction. Then AND operation was performed and assigned to our local variable through the variable we defined as global. Normally, in our code, the number “100” is compared to at first, but here we see the results of the compiler’s optimization of the code:) On the line “CMP [EBP+VAR_14],32h” compares the data in [EBP+VAR_14] with “50”. Then we see the JLE command, which stands for Jump Less or Equal, which means branch if it is less than or equal. Here we see a red arrow going to the left and a green arrow to the right. If this condition is not met, the red block will run, and if the condition is met, the green block will run, and the code will continue to work from that section. 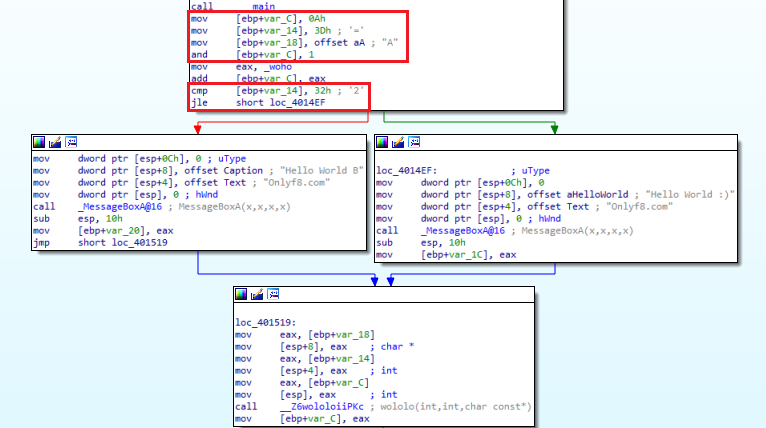 Normally, we have said that API calls are Pushed. Here we see a different use. He was placing data in a push stack, in this example the Mov instruction is used to move data based on ESP, or Stack Pointer. In fact, it does the same function with different instructions. After executing the instructions in the right and left blocks, the two parts are connected to the same block. 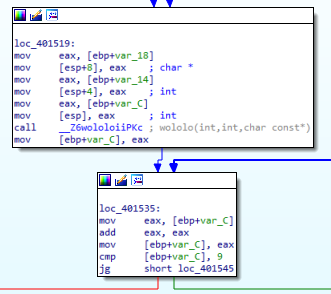 When we look at the right part, we see that it comes out of the while loop and comes to the switch-case part. With the “cmp eax, 32h” and “JA” instructions, we see that the data in “EAX” is checked to see if it is greater than 40. In fact, although the first case we wrote was “10”, we understand that the code became this way as a result of optimization. On the left, we see that there is a while loop.

After the switch-case commands are finished, we come to the For loop section. Here we see that the numeric value “14h”, that is “20” is assigned to EAX, then compared to “[EBP+Var_C]”. When we look at the “for (int i=20;i<value1;i++)” line of the code, we see that we are actually looking at the value1 value greater than 20. But when we look at the compiled code, we see that it is greater than or equal to 20. In cases where it is not greater or equal we go to the red part, that is to the left part, and the codes in the loop are executed, and we see that they exit the loop as soon as they are greater than 20 or equal. The purpose of my stating this is that; Do not expect exactly the same logic as in the code in the compiled file. The process will be the same, but the logic may be different.